It's been a while. How is everyone holding up? Ok, full transparency moment: try as hard as I might I just can't seem to get back to Nu-Perspective on a regular schedule. However, there WAS one redesign I was sitting on, and now with the rebirth of Milestone I figured why not drop it. The title gave it away but yes, I'm talking about HARDWARE!

For those of you who may not know, NuPerspective is the column where me and my writing collaborator Fabian Wood revamp and update various underdeveloped, underutilized, cheesy and/or all-but-forgotten Nubian (black) comic book and pop culture characters. We stay within continuity for the characters as best we can and then take the stories and art to places we think will showcase them in cool, fresh, contemporary and exciting ways both visually and story-wise. Now, Milestone beat us to the punch, but we still wanted to drop what we did. Please note,made to the character in the new series. our story does not incorporate any revisions Milestone to the character in the new series. 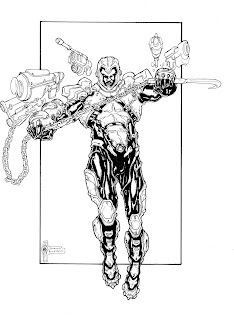 Story: A diamond in the rough, Curtis Metcalf was born in the impoverished projects of Dakota City, but was an intellectual prodigy. Seeing great potential in the young boy, corporate savant Edwin Alva took Curtis under his wing, and became like a surrogate father to Curtis. Exploiting Curtis’ genius over the years, Alva Technologies became a powerful tech conglomerate. Meanwhile, Curtis lived in an idyllic state, even believing himself entitled to the company fortune as Alva’s “adopted son”. Curtis’ delusions were soundly thrashed when Edwin admitted he only used Curtis as a valuable resource for his company and was nothing more than a tool, a “cog in the machine”. Devastated by this revelation and sense of betrayal Curtis was consumed by revenge.

Discovering his former mentor’s ties to virtually every facet of organized crime in Dakota, Curtis secretly blew the whistle on him. But Edwin’s influence and corruptions ran deep. If Curtis was going to see justice, it would have to be by his own hands. Curtis constructed a bleeding-edge exo-suit and fought organized crime as the high-tech vigilante Hardware for many years, chipping away at Alvan’s empire, codenamed S.Y.S.T.E.M, until it was no more.

Afterwards, Curtis founded Hard Company to replace the corrupt Alva Technologies. But despite all of his successes and victories, Curtis’ conscious continued to prick him. His ambitions and motivations were always petty and selfish, and he never quite grasped the nobler aspects of being a true hero. Eventually bequeathing Hard Company to his former rival and protégé Tiffany Evans (aka Technique), Curtis went on a sabbatical to find his next calling.

It was during this reprieve that Curtis was murdered, presumably by an old, vengeful nemesis also thought dead. But that would not truly be the end of Metcalf. In his later years, Curtis had been experimenting with digitizing human consciousness, a fringe science that he was able to crack. Downloaded into a fully autonomous Hardware suit, the resurrected Curtis spent months in an isolated bunker acclimating to his new body and rediscovering who he really was before his "death". With his memories fully restored and his resolve ablaze once more, Curtis is once again on the hunt for a reconstituted S.Y.S.T.E.M. which has recently been terrorizing Dakota City.

Powers/Abilities: Curtis Metcalf has super-genius-level intelligence and is in fact one of the top five smartest people on the planet. He has an extensive encyclopedic and practical knowledge with physics, machinery, technology, engineering, computer programming and metallurgy. Whereas before his armor had an on-board A.I., named D.O.B.I.E. (Digital On-Board Integrated Electronics), Curtis is now the suit’s OS. As such, he no longer requires food or oxygen to survive and is self-sustaining. For psychological reasons, he must still periodically "sleep". Curtis’ new fully cybernetic body possesses incredible strength of over 100 tons, and can move at hyper-sonic speeds. He is also capable of self-propelled flight using reverse engineered alien anti-gravity technology. His body is nigh-invulnerable, and even if damaged, is capable of self-repair. Metcalf’s senses have also been enhanced far beyond human limitations. He can hear ultra/infra sounds and pick up transmissions, and can see the entire electromagnetic spectrum. He also possesses powerful techno-pathy and tactile techno-kinesis. His mind is now capable of accessing, processing and retaining vast amounts of information and data. A staple weapon of Hardware that remains is his Omni-Cannon, which can now form hard-light weapons that can shoot virtually any conceivable energy, ballistic, artillery, gas or projectile from his forearms, along with a retractable plasma blade, an ionic whip. His last resort is a chest-mounted “Plaser” discharger. His body is thoroughly outfitted with other offensive and defensive weapons and gadgets, like magnetized mines, laser turrets, miscellaneous grenades, cloaking device and mini flying drones called Skylarks. His body is constantly adapting and evolving after every altercation, so it will continue to add and upgrade attributes perpetually.

******
And there you have it. Let us know if you like what we did with this revamp and be sure to purchase the new Hardware comic from Milestone to see what the official revamp of this tech hero is about. Oh, and here is a link to our Nu-Perspective revamp of Technique who was mentioned earlier.
http://shawnah-lean.blogspot.com/2019/02/nuperspective-black-history-month-day-4.html
This is the part where I would normally say see ya sooner than later for another Nu-Perspective, but it might be later rather than sooner. Before you go, check out this Q&A below with Fabian and yours truly as we dive deeper into our process.
What do you like most about the character? – Fabian: Metcalf’s story is just about modern-day slavery and exploitation, in a corporate setting. There is a plethora of things to explore and comment with that concept that were definitely touched upon in the original run. It deserves a resurgence.
Shawn- For me it was seeing this Nubian character shown as a super intelligent, hard-working, articulate, powerful character who wasn't afraid to take matters into his own hands.

What made you choose this character? – Fabian: Like most of the forgotten gems of Milestone that we’ve been highlighting, Curtis Metcalf was a no-brainer. We were just waiting for the right time.
Shawn: As much as I love the character from an internal story point, his costume was atrocious. I KNEW I had to get my hands on him for a redesign.

In regards to the story aspect of the update, what was your main inspiration for the direction? – Fabian: How do you top the “Iron Man” armored-architype superhero? By blurring the line between man and machine. From classics like Ghost in the Shell, nuggets like Robocop, to more contemporary Replicas, “man in machine” fringe sci-fi with a superhero flavor was the direction that made our Metcalf most unique. He’s not Steel, or Cyborg or War Machine, he’s at the farthest end of that spectrum.

Is there something in particular you want to point out? – Fabian: Curtis was light-years ahead of John Irons, who debuted the same year. I’d even wager that his suit was superior to Iron Man around the very same time. Of course Tony’s caught up over the last few decades, but Curtis was definitely like the Dreamcast of his generation.
Shawn: Yes, I want to highlight that what Hardware represented and represents is still something that needs to be discussed today. Which is rather sad. These characters are necessary.