It has been exactly 14 months since the great “Street War”.


The event was triggered when a Meta-breed despot by the name of Warlord Oguun took the city of Bridgeport hostage.


His initial attacks ravaged the city.


That, plus the resulting destruction caused from the “Street War”, the battle that occurred when the police and a band of vigilantes rose to take Oguun down, nearly completely destroyed the land.


The people of Bridgeport stand resilient however, and are on the road to rebuilding their lives as best they can. AntiMeta-breed sentiment is at an all time high, but never more-so than with Hela St. August, a rebellious street kid and graffiti writer, who wants to make it her goal to expose the truth about all things. This includes incompetent government, conspiracy theories, and most important to her, the Metas; who she considers metaphorical living timebombs with a short fuse and corruptible sociopaths. Her quest for answers no matter the cost will bring her into conflict with Roman K. Gideon, local mogul and huge supporter of a Pro-Meta Bill. This path becomes more jagged and treacherous in a chain reaction of events, as a dark secret is awakened inside of her. And when Hela encounters the resident protector of Bridgeport, Black Aizan, there is no escaping what must be done. 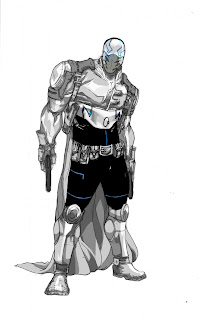 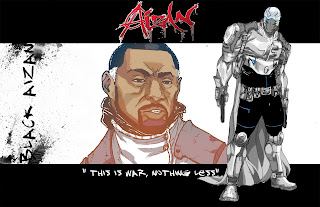 Journal: Adigun Akinsanya, aka Black Aizan, was born Calvin Chase to a poor family in Manchester, England. His father and mother worked on the estate of an aloof wealthy socialite by the name of Major Buckley, where they also lived in the servant quarters. Calvin was an exceptionally smart child, but very sickly. Together with the fact that he felt like an outsider watching the rich family he stayed at enjoy the finer things of life while his own family scraped by, he always kept to himself. It was at age 10 when Calvin fell gravely ill with a condition unsolvable by all of the physicians they saw. It was the Major who provided a chance for Calvin to live in the form of a doctor by the name of Dr. Edu Batte. And indeed, Dr Batte somehow miraculously saved Calvin’s life. From then on, the once cold Major took to Calvin and welcomed him and his family into the Buckley household as kin. He even went so far as to pay for all of Calvin’s tuition, a fact that didn’t sit well with the Major’s son. At the tender age of 15, Calvin was accepted into the prestigious University of Cambridge, where he went on to excel and study law and engineering. In just 3 years, he graduated with full honors. It was soon after that he disappeared off the face of the earth with his only presence being a few cryptic letters to his parents. He resurfaced 10 years later sometime in the 60’s in America, changed his name and established roots in the city of Bridgeport. Two years after that the first incarnation of the hero known as Black Aizan appeared. It is believed that somewhere in those 10 years he joined The Clan of Aizan, a clandestine fellowship of self-titled “world protectors”. The clan performs a ceremony called The Transference that passes abilities and knowledge from one successor to the next, with that person adopting the name of Aizan. 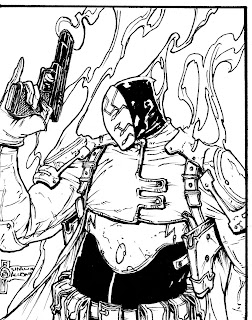 Virtues: Black Aizan is a low level psychic possessing telepathic spatial antibodies. These telepathic antibodies allow him to alter people’s mental perceptions to his choosing when he feels threatened. He can cloud people’s minds, mislead them, or create illusions. Black Aizan manifests these abilities through a psychic astral form, with his body and clothing turning to mist. When in “battle mode” this telepathic mist registers to the eye as smoke.

Biometrics: Black Aizan was born with his special abilities so is considered an Angelbreed.

Physical abilities: Through years of training and natural biological augmentation, Black Aizan is able to push his body to limits of an almost superhuman level, including increased stamina, strength, flexibility and more. With this natural ability plus his telepathic powers, his mind and body are highly resistant to torture. 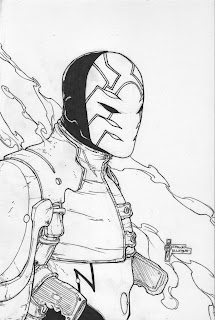 Psyche/Extra: Black Aizan is a gruff, driven, purposeful individual who doesn’t believe in wasting time. He is an older superhero that’s felt the wear and tear of the life, both physically and mentally. He’s quiet and methodical and some people would think he’s rude. He is quite passionate about his Nubian heritage, and it was said that he added the name “Black” to his title of Aizan during the Civil Rights movement when he reappeared to reflect this pride. While not a murderer, he will kill for the greater good if necessary. He only possesses his full telepathic powers when in mist form. Also, despite being in somewhat decent physical health, years of combat and the effects of his age have begun to take their toll.

Weapons/Paraphernalia: Black Aizan utilizes two 9mm style handguns that primarily fires non-lethal concussion rounds. He is able to switch artillery however to varied "trick" projectiles including knockout gas capsules, rubber rounds, explosive tips and more. His costume is an advanced light-weight but highly protective suit that protects him from most minor firearms and damage. Black Aizan has access to various hi-tech gadgets depending on the situation thanks to the privately funded, secret underground Innovations ThinkTank of the Clan Aizan. He often lends his intelligence to the Think Tank.

Aizan is an original character created by Shawn Alleyne. The story combines all the elements and themes that Shawn loves into one book-- Hip-hop; Martial Arts; Par-kour; Graffiti; and Super-heroes.  This is a story with something for everyone: a new take on vigilantes, urban ninjas, Kung-fu fighting angels, and more, all interwoven into a super-hero story with social commentary.
This is an urban sci-fi martial arts hip-hop superhero epic.

Aizan tells the story of a young woman by the name of Hela St.August, a passionate Barbadian artist and graffiti activist, who lives in the city of Bridgeport. As a result of a super-powered war, her city is left devastated. There’s a new emerging superhuman and vigilante community, and she feels disgusted by people with powers and views parahumans as parasites. Angry, bitter and rebellious to start with, Hela's life slips into further disarray when she not only discovers that SHE has powers but that she is also heir to the legacy of the supernatural essence of Aizan.
Posted by Shawn Alleyne at 6/17/2020 10:32:00 AM No comments: