The characters above are part of a new story I've been commissioned to do called Surian Seed. The concept was created by Maurice Mander Jr,  and due to life being life, we both faced major obstacles that forced us to constantly  stop, then restart the project. At first I was brought on just to flesh out artwork already started by another artist.Over the course of time, as is my nature, when I'm involved in a part I can't help but give my 2 (sometimes 3) cents worth, and the concept is currently being developed by us both. Maurice is still the creator and owner, and I'm in the background sprinkling on the spice in the form of character design, story elements and edits. With the help of a few great colorists, like Blair Smith,Watler Ostlie (who hooked up the above pics) and others, we hope to forge ahead with this project to a final release.

Characters:
Infinite- Infinite is a man burdened with trying to save not just the human race, but the whole cosmos. The threat is a new savage race of alien beings called The Surians, a race hellbent on spreading their dominance throughout the multi-verse. Infinite must now gather a new generation of heroes together to prevent the extinction of mankind!

Sinnerblock- A man cursed and blessed with power not of this world, this gentle giant joins Infinite in his quest to save the world.
Posted by Shawn Alleyne at 5/19/2011 08:33:00 AM 1 comment:

I saw a post by Ryan Ottley on DA a few months back that really got me thinking. In it he was talking about artwork of his he hated and not wanting people to see it. So he burnt them. The pieces not the people. As much as I hate a lot of stuff I draw, and there's A LOT of stuff I won't dare show people, I can't bring myself to destroy my work. However, there's some stuff that's in my portfolio that I'm retiring...not only is this stuff old but it's just bad art. And I've decided to publicly  share that retirement with you.
Why? Not sure. Maybe I stand by where I was skill-wise when I did the piece. Maybe it's not that big of a deal. I will admit I'm a little nervous...there's something to be said for having bad art existing in this new digital environment that never forgets. I mean, suppose someone pulls up a horrible old piece of mine that they think represents the 2011 Shawn and that takes away from possible employment? Can't afford too much (or any) of that. But hopefully, that won't be the case.
Anyways, here's the first piece I will forever retire from my portfolio. Be kind.

Someone thought it would be cool to interview me. Thanks for being kind enough to think so Nubian7 aka Pharaoh. You can see the results of said interview here:

It's kinda long but the man is nothing if not in depth.
Be sure to let him(and me too, why not) know what you thought. As a special bonus, I slipped Nubian a special piece of exclusive art just for the interview. And as much as I would like to show that art here and talk about the project a little more, I feel it would go against the "exclusivity" of the piece. But then I thought, hey, why not just give you guys a never before seen piece here?

Well you twisted my arm. Here's a sketch I did of a character called Koth Of The Hammer from World of Warcraft.
Enjoy. 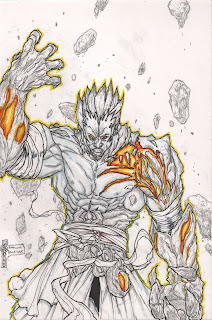 Back From The Dead..

...With some exciting news!
Last week saw the release of the official STREET TEAM COMIC!!!!
What's the Street Team Comic you ask? Well Silly, it's a collaborative comic book cross-over event, created by myself and 5 other independent creators, that features the team up of 5 unique vigilante characters. Click on the link below for a 5 page preview of the book, then go order yourself a copy...or 5(may as well keep the theme going).
www.indyplanet.com/store/product_info.php?products_id=5281

I'm excited cause this is the result of a lot of work. Not only did I ink the book, I co-wrote it, did edits, and provided the penciled and inked cover art. Shout out to all my Street Team creators though, who made it all possible.

But there's even more news: we didn't just stop at the comic. Nooo! We're currently developing THE STREET TEAM VIDEO GAME!! And we would like your help. Please check us out at IndieGogo where you can donate to our fundraiser AND receive cool stuff for doing so. With your help we can raise enough money to finish making the game and get it into your eager paws.
www.indiegogo.com/BSH-Street-Team-the-Game


So that's it for now. Stay tuned for more updates and thanks in advance for your support.

Hoo-zah for the Indy Artist!