Welcome back to another edition of Nu-Perspective, THEE column for all redesigns and updates of various Nubian (black) comic book characters you never knew you loved. 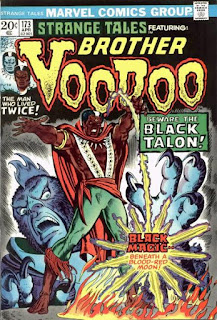 April was supposed to be a celebration of Nubian Avengers characters, and even though we're a little late, we're still going to drop these entrees for you.Cause really, with Endgame doing the numbers it's doing, Avengers hype isn't dying anytime soon. So without further ado, our first entry is Brother Voodoo, aka Dr Voodoo!!! 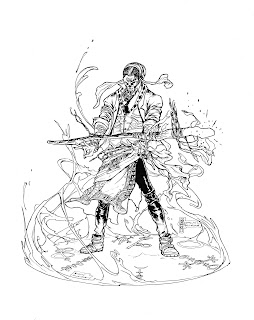 A man of science and rationality, not dissimilar from Doctor Hugo Strange, Jericho Drumm was an educated and accomplished psychologist. When his brother fell under the curse of a rival bokor, Jericho sought out the tutelage of Papa Jambo, a powerful and reputable voodoo master. Naturally apt at learning, Jericho took to the mystic arts like a fish to water, mastering the basics far quicker than most disciples. In time, he even surpassed most other houngan in skill and power. Calling himself Brother Voodoo and fused with his brother’s disembodied soul, Jericho waged war against the formidable demons and malicious spirits/gods plaguing his homeland of Haiti.

His battle against the occult and otherworldly supernatural forces eventually brought Jericho onto the world stage, going against all forms of ancient evil deities, zombies, vampires, demons, deranged cults and the like, who threatened mankind and the innocent all over the globe. These extraordinary paranormal adventures saw Drumm team up on occasions with the likes of Spider-man, the Avengers, Daredevil, Black Panther, Blade, the Fantastic Four and even Dr Strange himself, among others; always ready to lend aid against the unspeakable darkness that lies just a veil away from reality.

His acts of valor did not go unnoticed, and having proved to be a pure heart with a clean soul, Jericho Drumm was elevated to the auspicious role of Sorcerer Supreme after Dr Strange (until he died and it reverted back to Dr Strange). Resurrected after a harrowing battle with the god Agamotto – by the often villainous Doctor Doom no less – Brother Voodoo’s battle against the malicious forces of the paranormal continued. Having to battle his own brother Daniel, who had been tempted with his own resurrection by the Hand, Jericho tragically had to end his brother’s life to save the world from a resurrected and possessed Hulk.

Since that event, the public whereabouts of “Doctor Voodoo” remain unknown. In actuality, Jericho has renounced his more public exploits to embrace a more humble path. Journeying wherever he is needed, wherever the uncanny forces of darkness prey and oppress the innocent, destitute, desperate and forgotten of society, Drumm will be there fighting for them, defending them as the Gunner of God, the Avenger of the Supernatural.

POWERS/ABILITIES: A paragon of the archaic and esoteric arts of voodoo magic, Jericho Drumm is an unparalleled master. This has endowed him with powers over the elements, hypnosis, spirit possession, illusion casting, clairvoyance, astral projection, communication with the dead and supernatural beings, limited necromancy, teleportation, invisibility, intangibility, flight and resurrection of others, among other yet exhibited abilities. His magical prowess grants him a high level of immunity/invulnerability against other magical attacks, spells and influences, on par with a Sorcerer Supreme. He can also discharge various forms of mystical energy in blasts, or generate nigh-impenetrable protective barriers. He is however vulnerable to carnal (physical) attacks and harm like any normal human, and voodoo magic can only be applied for rapidly healing of minor injuries or temporary boosts to his physical limits. While he has battled vastly powerful foes, Drumm can be outclassed by other formidable magic users who have mastered more than one discipline, or one he is not prepared for or familiar with. As an accomplished student in the field of psychology, Drumm can easily “read”’ people and is capable of manipulating them through conversation to do what he wants or tell the truth. He can even use this knowledge to deceive others (human, alien or supernatural).

PARAPHERNALIA: As a voodoo priest, Jericho is never without his miscellaneous ingredients for incantations, drugs or minor spells. He also carries a host of voodoo dolls to physically overpower and control select individuals. Since his inception as “Brother” Voodoo, Jericho has not been without his trademark Staff of Legba – an innocuous two-headed mystical rod – that greatly amplifies Jericho’s powers, while also granting him access to more and diverse powers that span dimensions/realms. When he was officially Sorcerer Supreme (although he is still a viable candidate) he had possession of various artifacts such as the Eye of Agamotto, the Cloak of Levitation, Wand of Watoomb and Book of Vishanti.

What IS Nu-Perspective you ask? Well, it's a bi-weekly column I started with my writing collaborator Fabian Wood with the purpose of spotlighting, revamping and updating different underdeveloped, underutilized and all-but-forgotten Nubian (black) comic book and pop culture characters. Our goal is to showcase them in fresh, contemporary and exciting ways both visually and story-wise.
Posted by Shawn Alleyne at 5/01/2019 08:45:00 AM