Annnnnnnndddd we're back!! As you may or may not know, NuPerspective is the column where me and my writing collaborator Fabian Wood revamp and update various underdeveloped, underutilized, cheesy and/or all-but-forgotten Nubian (black) comic book and pop culture characters. We stay within continuity for the characters as best we can and then take the stories and art to places we think will showcase them in cool, fresh, contemporary and exciting ways both visually and story-wise.

For some reason May became the unofficial Cartoon themed month, and for this edition of NuPerspective we just knew we had to tap into classic cartoon history of the Super Friends show to bring you: BLACK VULCAN!!!

Originally Black Lightning was supposed to be in the cartoon, but due to legal issues, the powers that be created this substitute character. As a result there was a lot unknown about ole B.V, so here's what we did. Enjoy!

Story: Born in the East African country of Uganda, young Jabari took pride in his African heritage on a fundamental level, but never put much thought into the life he grew up in. An academic prodigy, Jabari was urged by his parents at a young age to study abroad in America to “gain a better life for himself”. Overseas, Jabari excelled in his studies but also became enraptured with American lifestyles and superhero awe, putting his African traditions behind. In the last year of his schooling Jabari partook in a study on superhuman cell potential to gain extra money. Unexpectedly, the tests and drugs unlocked his latent powers of electrical control. Jabari decided to use his gifts to help others, bringing him to the attention of the prestigious Justice League where he debuted as the electrified superhero “Black Vulcan”. After many adventures Jabari semi-retired from the superhero life, choosing to return to his studies and graduate. Which he did, becoming a professor in Africology and African-American studies. One day, while appraising African artifacts for a museum, Jabari came into contact with a ceremonial axe that happened to in fact be a powerful ancient relic once belonging to Shango – the African god of storms. Blessed with ancestral revelations Jabari discovered he was a long lost descendent of the African prince who was later deified to godhood. The axe also bestowed upon Jabari a deeper understanding and stronger control of his powers. With newly opened eyes Jabari was dismayed over the lack of African awareness and relevance, as well as the prevalence of racism, in the American superhero community. This revelation was overshadowed by a distressing message from his homeland that his widowed mother had tragically been killed in the crossfires of political rebel fighters. When he mournfully returned to his birthplace, Jabari’s idealism that had blinded him those many years abroad were further shattered. Faced with the harsh realities that plagued his people such as corruption, in-fighting and other atrocities of injustice, Jabari was compelled to do something about it. Now resolved to fight for his people, Jabari must contend with both the ills of the Western world that have infiltrated his country as well as the treacherous and malicious nuances of Uganda and the wider African continent. Shedding the title of Black Vulcan, Jabari is reborn as Shango, with a new mission to become the foremost advocate of Afro-centrism both in the classroom and in the geo-political scenes, choosing to a superhero AND teacher to his people.

Powers/Abilities: Jabari has vast electro-magnetic powers that can be utilized in a variety of ways. Besides absorbing and discharging large amounts of electrical energy, Jabari can augment the ambient atmosphere to generate localized thunderstorms. He can also “see” electric currents, even a person’s bio-electric aura, operating like thermal or night vision. He can convert his entire body into pure electrical energy, allowing for self-propelled flight, light speed traversal and teleportation through the air, and intangibility. He can generate powerful electro-magnetic barriers and exhibits magno-kinesis, control over metal. Due to his Shango lineage and new knowledge, he is so skilled with his lightning powers that he can form lightning tethers/whips and hurl lightning rods. Jabari has genius-level intelligence and has also intensively studied international politics, African history and economics.

Paraphernalia: Upgraded through a Wayne Industries benefactor, Shango’s suit is insulated and reinforced to be bullet-resistant and fire-proof. The unique material also enables him to blend well into shadows or low-light areas.

******
And there you have it. Check out Black Vulcan's...ahem, sorry, Shango's's original look and adventures in the cartoon and let us know if you like what we did with this revamp. Then see ya sooner than later for another Nu-Perspective. But wait, before you go, check out this Q&A below with yours truly as I dive deeper into my process, complete with bonus sketches.

What do you like most about the character?
My favorite NuPerspective characters are the ones that have an open background. There's so much Fabian and I can do then.

Did the character pose a challenge to update and if so what was the hardest part of the redesign?
I guess the hardest part was a self-imposed challenge of pushing the design to incorporate the Orisha Shango and some African designs. Luckily I feel pretty good with the results.


In hindsight is there anything you would do differently now?
Nothing I can specifically pinpoint but I worry I didn't push the design far enough.

What was the most fun part to redesign?
Adding pants. lol

In regards to the story aspect of the update, what was your main inspiration for the direction?
The main direction was to get this guy as far away as possible from the Westernized Caucasian design sensibilities as possible. Once Fabian established the character as a more African man than African-American, I knew what I wanted to do. Tying him to Shango was the final cherry on the dashiki. I googled character renditions of Shango, African fabric, and went from there. 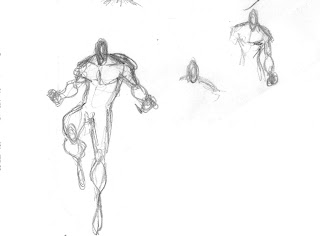 Is there something in particular you want to point out?
Yes. The fact that this guy needs to make a reappearance in the DC Universe proper.


Fine print: All characters are copyrights and trademarks of the respective publishers and creators. This column is used solely for artistic enjoyment. We aim to showcase Nubian characters in fresh, contemporary and exciting ways both visually and story-wise.