What's up peeps!! Welcome to another installment of Nu-Perspective, THEE home of revamps and updates of various underdeveloped, underutilized and all-but-forgotten Nubian (black) characters!!

This entry was supposed to drop in July, and I ask you to please forgive the lateness as we take care of some stuff. My Nu-P collaborator Fabian Wood is on me to catch up and we'll be dropping more heat soon. But without further ado we give you: VIBRAXAS! 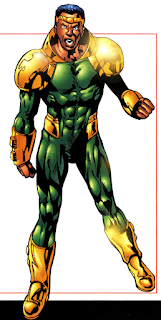 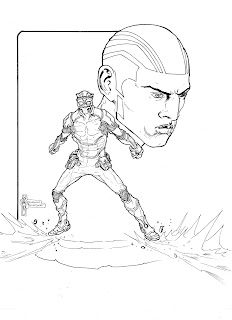 Story: The son of the original Vibraxas (N’Kano) and the disgraced Dora Milaje (female Wakandan Pretorian guard) Asira, N’Kuno’s life was already at a disadvantage. A pariah for his tainted parentage, N’Kuno only wanted to bring honor to himself and his family. Seeing the sincerity and nobility in young N’Kuno, T’Challa, The Black Panther and his king, sent him on the same academic and spiritual pilgrimage he undertook outside Wakanda. It was then that young N’Kuno got a taste of his latent mutant powers and the world of superheroes. Returning home with this newfound knowledge and inspiration, N’Kuno decided to become a superhero of Wakanda, even though it had the Black Panther as its champion. Rather than feel threatened, T’Challa encouraged N’Kuno’s role as the new “Vibraxas” and overseer of the Hatut Zeraze (secret service/national guard). With rising political tensions, social unrest and factions and sects looking to reshuffle the balance of power within his homeland, N’Kuno must remain watchful of sedition within his ranks and among his fellow elite guards while ever mindful of a new home-grown terrorist cell looking to plunge Wakanda into a state of anarchy. His quest to protect the state may send N’Kuno down a path that leads to Wakanda’s darkest and perhaps most shameful forgotten atrocities that will not only shake N’Kuno to his core, but the very foundation of the nation as well.

Powers/Abilities: Unlike his father who could not fully control, and by extension, master his vibration powers, N’Kuno is naturally imbued with these abilities. Like his father, N’Kuno can generate vibrations from his being to cause localized earthquakes, suspend objects and persons in vibrational stasis, crush objects and phase through solid matter. He can also generate powerful shockwaves, and while not true self-propelled flight, can use vibrations to levitate off the ground up to seven stories. His body has an above-average resilience to physical and energy attacks, which his body naturally absorbs the kinetic input and can discharge it as sonic bursts. He can also cancel noise within a localized area of effect. He can also induce vertigo and debilitating migraines in others through infra and ultrasonic pulses. Due to his naturally vibranium imbued DNA, N’Kuno’s physical prowess are on par with T’Challa, but lacks the Black Panther’s extensive training, intellect and discipline. N’Kuno is also an accomplished diplomat and negotiator.

Paraphernalia: The suit he wears is a modified version of the suit his father wore, but unlike his father who had to wear it to help stabilize his powers, N’Kuno’s powers are more controlled, thus he only uses the suit amplify his abilities and grant added durability.


Check out his original look and story and let us know if you like what we did with this revamp. Then see ya sooner than later for another Nu-Perspective.

What IS Nu-Perspective you ask? Well, it’s a bi-weekly column I started with my writing partner Fabian Wood with the purpose of spotlighting, revamping and updating various underdeveloped, underutilized and all-but-forgotten Nubian comic book and pop culture characters. Our goal is to showcase them in fresh, contemporary and exciting ways both visually and story-wise.